Place where Brahmaji had come to marry Radha and Krishna

Bhandirvan, the pious land which united Radha-Krishna! Bhandirvan one of the 137 sacred forests in Mathura lies 10 km away from Vrindavan. It is the place where Radha and Krishna used to perform their youth plays and it is also believed that it was Lord Brahma who got them married at this very place. No wonder, people have lot of reverence for Bhandirvan. 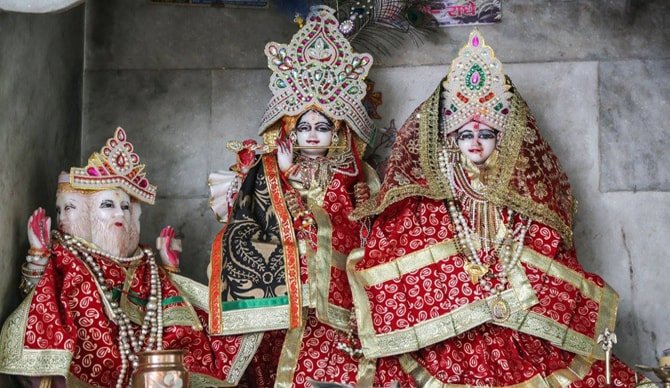 Bhandirvan: The place of Radha-Krishna unison!

Mathura District in Uttar Pradesh is referred to as the land of Shri Krishna and it is filled with the places that are reminiscence of their life in this world. All the holy places in Mathura are near each other and known as the ‘Braj Bhoomi’. The forest Bhandirvan in the Mant sub district of Mathura is a part of the ‘Braj Bhoomi’ where it is believed that Shri Krishna killed the Rakshas Pralambhasura who had kidnapped his friends. This forest also got the privilege of witnessing the marriage of Krishna with Radha ji.

It happened that Baba Nand went along with infant Krishna to Bhandirvan 10 km away Vrindavan for cow grazing. Suddenly the infant Shri Krishna thought about showing him a play. When Nand Baba sat under a tree to rest, a ferocious storm started blowing and the environment became dark. Nand Baba got scared about his little boy. Shri Krishna also acted as if he was frightened and hugged Nand Baba with fear. But then Nand baba saw the beautiful gopi, Radha Rani approaching from the storm. She was glowing with beauty. Realizing that it was a play, he gave the infant to Radhaji and said that he knew she was dearer than Goddess Laxmi to the Godhead. He said that she can enjoy with Shri Krishna but should leave the infant back home to Rani Yashoda. Taking a promise of not revealing what he saw there, Radha Rani took the infant from him.

Radha Rani was very happy to see the infant and kissed him when suddenly a palace appeared before her and she went inside. The palace was shining with jewels and rubies and then she saw the infant vanish from her lap while a young handsome man appeared before her wearing jewellery and a crown. She realized it was no one else but Shri Krishna. He praised Radhaji acknowledging his deep love for her. He told Radhaji that she was the other half of Shri Krishna but Radha complained of the pain of separation. Shri Krishna consoled her and asked her to wait as he would make her happy. At that moment, Lord Brahma appears to both of them very respectfully and conducts their marriage ceremony (Gandharva Vivah). Thereafter Shri Krishna and Radhaji spend time together in delightful pastimes. After some time, to her disappointment Shri Krishna suddenly returned to his infant form and a voice promises Radhaji that they would keep returning for these lovable pastimes. Thereafter, Radhaji took the infant Krishna back to mother Yashoda. After that Radhaji would go to Bhandirvan everyday to indulge in the delightful pastimes with Shri Krishna. 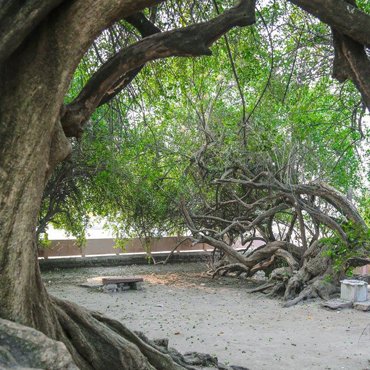 A very big and beautiful Banyan tree that covers miles. It is believed when Krishna and Balram indulged in youth pastimes in Bhandirvan, they used the Branches of this tree to cross the Yamuna River. They used to rest and enjoy their lunch under this tree. The deities of Shri Radha and Krishna is also there where Krishna is shown putting vermillion on the forhead of Radha.

This tree is near Bhandirvan. It is said that Shri Krishna used to climb on this tree and play his flute, Vamshi to call his cows.

A special well which has holy waters flowing in it. When Krishna killed the calf demon Vatsasura the gopis asked him not to touch them as he had killed a cow and he much bathe in holy waters of the rivers to purify himself. So Krishna hit the ground with his flute and all the holy waters started flowing there. Krishna took a bath in this well and only then he was accepted by the gopis.
Book Tour Click to Call

Just 10 far from Vrindavan and 22km from Birth place of Lord Krishna, Mathura. You can reach here and take a Govt or Private bus or taxi.