Govardhan Hill, the hill near Mathura that Shri Krishna lifted on his finger to save his fellow villagers from fierce rains! Also known as the Royal Hill, Mount Govardhan or Giri Raj, it is really a great place of pilgrimage for the devotees. 22 km away from Mathura, it is a spectacle and the devotees take a parikrama (round of the hill) as a symbol of reverence. 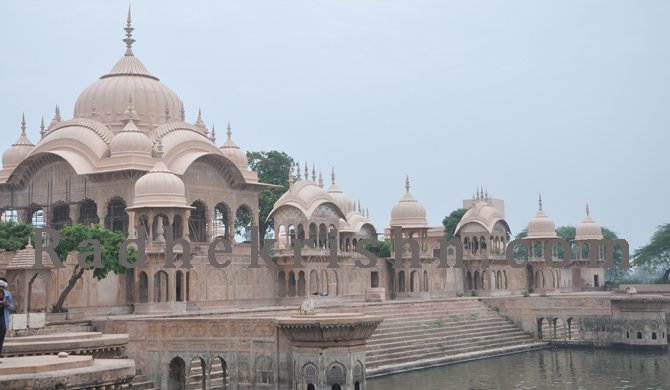 Govardhan Hill near Mathura is perhaps one of the biggest miracles of Shri Krishna. The story goes that the villagers used to perform a special Puja but Krishna ji asked his father about it. He was against it and he debated with the villagers that they should do their duty and not indulge in sacrifices. The villagers were convinced and did not perform the Puja which made Lord Indra extremely angry and immersed the village in floods.

So Shri Krishna as a boy lifted and held the Govardhan Hill or Govardhan Mountain on his index finger and all the natives found shelter under it to be saved from the rage of Indra. The floods continued for seven days and seven nights. At last Indra had to accept defeat. People visit the place during Guru Purnima for Govardhan Puja with a 23 km long Parikrama (round). 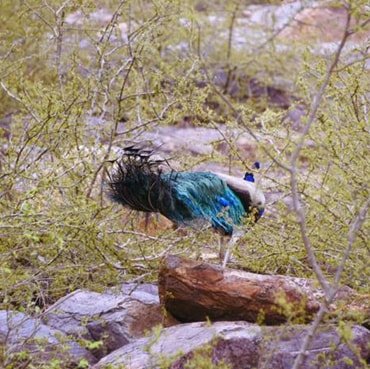 Natural form of the Lord Krishna 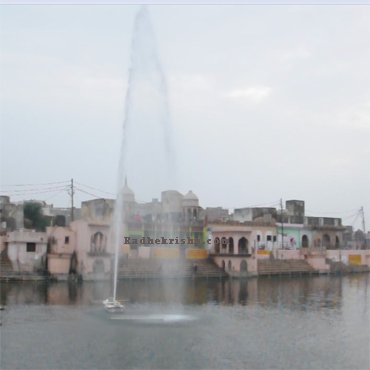 Largest lake or Kund in the central part of the Govardhan 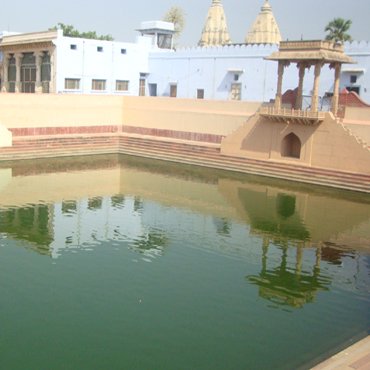 Kund Related to Radhe and Krishn 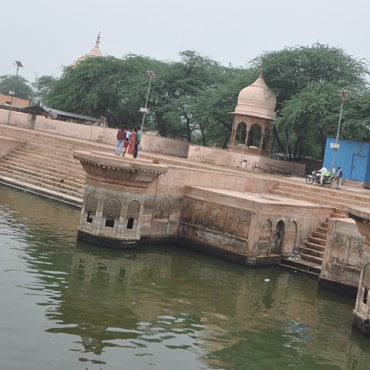 Kusum Sarovar is the pond surrounded by steps from all sides. 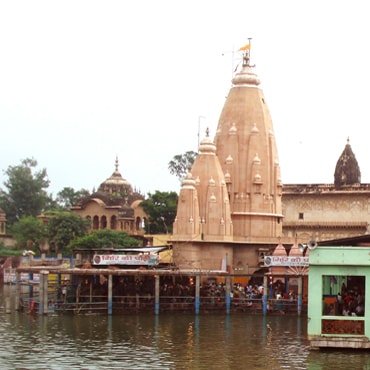 Govardhan Hill Parikrama is a sacred ritual performed by the devotees. Parikrama means taking a round of the place on your feet. The Parikrama route is 25 km long. It is this hill which was lifted by Shri Krishna on his index finger to protect his fellow villagers and animals to save them from the floods caused by the angry Lord Indra.

Now the hill lies there with the whole scene depicted by a sandstone structure. It is said that Govardhan Hill was about 3 KM high but due to the curse of Pulatsya Muni, it keeps decreasing by the size of a Sesame seed. Devotees also take rocks from the Govardhan and worship it just like Shri Krishna.

Including Radha Kund & Syam Kund It may be 25 km long walk around the hill but the devotees do it diligently. This ritual of Parikrama is considered to be even better if is it done with milk. The parikrama should be done clockwise.

Radha Kund is just at 8 km distance from Govardhan Hill. It is also a holy place near Mathura in Uttar Pradesh District. The story goes that a demon disguised as a bull by the name of ‘Aristasura’ was killed by Shri Krishna. Radha asked him to wash his sins and purify himself since he had killed a bull. Radha and her milkmaid friends said that he had to visit all the holy places of the 3 worlds.

At this Shri Krishna said Instead of visiting these places he would bring the waters of these rivers there instead and just after he hit the ground with his heel and waters of the holy places erupted in the ‘Kund’ (Pond) which was named Syam-kund. Shri Krishna took a bath in it. Thereafter the gopis (milkmaid) and Radharani hit the ground with their bangles and a representative of the holy places appeared and said to Radha that their life would be virtuous if they could enter her pond! So with the permission of Radha and Krishna, the holy waters from all the holy places started flowing in Radha Kund

This temple was started by Shri Gopal Das Kaushik, a well known citizen of Mathura in 1970s. Here the deity is in the form of a rock and it is said that it keeps going down in earth every year. Now it has become more visitors.

Kusum Sarovar is the pond surrounded by steps from all sides. It has Kadambh Tree groves on all sides and a cenotaph of the Royal family of that time. It is that place where the gopis used to wait for Shri Krishna with flowers.

It is a pond restored by Raja Bhagwan Das and Raja Maan Singh which serves as the start and the end of Govardhan Parikrama. It has many enclosures and steps. It is said that the foster father of Shri Krishna Nand Maharaj asked Shri Krishna to take him for pilgrimage to take a bath in the holy rivers.

Shri Krishna told him that why go all the way, he could have the bath right there only. And he hit his flute on the ground and the waters of all the holy rivers erupted right there and Baba Nand happily took a bath there.

Large numbers of faithful people bathe here on Guru Purnima and Dipavali and take darshan of Girraj JI OR Shri Harideva. The stone ghatas at Manasi Ganga were built by a King of Jaipur Bhagavan Dasa.

Once according to the scriptures, Radha Rani and Gopis were waiting for Mansi to meet her beloved Krishna on the banks of Ganga. When he did not come for a long time, he started chanting the name of Lord Harde so that God could hear his voice and he would appear. His love touched Krishna's mind and he appeared in front of him as a seven year old beautiful child.

Seeing this, Radha Rani and Gopis were so happy that she started coming to that place everyday and singing devotional songs. It is believed that in fact the Hardev temple was built by Krishna's grandson. Today's Hardev temple was built by Raja Bhagnadas of Jaipur in the 16th century during the Shashan period of Shahanshah Akbar. The devotees take a bath in the Ganga and take the blessings of Lord Harde by doing Parikrama around the temple and take their blessings.

Govardhan Hill is just 22 km far from Mathura and about 80 km from Agra. Mathura and Agra both are famous tourist destinations and are well connected with all the major cities by train and plane. You can reach here and take a bus or taxi to Govardhan Hill.