After moving from Gokul Krishna lived there

Nandgaon, the village settled by Nand Maharaj, father of Shri Krishna! Nandaon or Nandgram is located at the top of Nandishwar Hill, 51 km North East of Mathura. Being the village where Shri Krishna grew up, it is a place of pilgrimage for the devotees of Shri Krishna. Especially during Holi, many tourists and pilgrims come here and take part in various cultural activities. 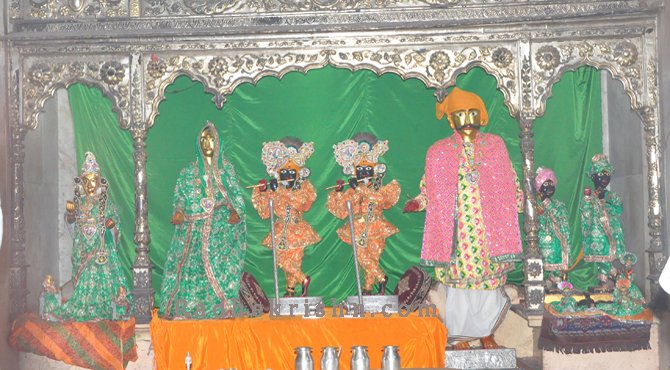 Nandgaon: The land of Baba Nand!

Nandgaon or Nandgram situated stop Nandeshwar Hill approximately 51 North-East of Mathura is believed to be the village established by Nand Baba. It is about 48 km from Vrindavan, the place where Krishnaji used to go to play with his cow herder friends and 20 km from Barsana, the home town of Radharani and about 65 km away from Gokul, their original village.

It happened that at the instigation of the maternal uncle of Shri Krishna, Kansa, the evil activities of the Rakshas had increased in Gokul. This prompted Nand Baba to think about shifting to another place to save his son little Kanhaiyya and his people. The whole Gokul village then shifted atop the Nandishwar Hill and named their village as Nandgaon.

It is a beautiful place with lots of green trees and greenery around, chirping of birds combined with the chirping of gopis here and there and a cool breeze blowing in which one could hear the melodious music of the flute. Dotted with Sarovar (ponds) surrounded by Kadamba trees, it is an amazing sight to see!

Nandishwar means the ‘Lord of Nandi’. It is another name for Lord Shiva. The story goes that the childhood and youth pastimes of Shri Krishna along with his friends, gopis and Radhaji had become quite famous in the 3 worlds. Everyone was amazed when Kanha, the incarnate of Lord Vishnu stole butter and curd, teased the gopis and danced with Radhaji. This also attracted Lord Shiva who wanted to witness it personally and for this he performed severe austerities to please Shri Krishna. Please by his prayers Lord Shri Krishna allowed him to take the form of a hill and stay there. So Lord Shiva resided there in the form of Nandishwar hill and enjoyed the youth pastimes of Shri Krishna. It lays in one of the sub forests of Vrindavan.

Nandgaon is the same place where father of Nandji resided along with his family before going to Gokul due to the terror caused by the Keshi Rakshas. Once again when the Rakshas became active at Gokul at the instigation of Kansa, Maharaj Nand decided to go back to the same place to protect his son Shri Krishna.

Tourist Attractions and Holy Places to Visit in Nandgaon

The home of Nand Maharaj is memorialized by a big temple which is constructed atop the Nandishwar Hill. The temple was built in the 19th Century by Raja Rupa Singh. In the beautiful temple amidst the Kadamba trees, sarovar and greenery all around, there are two deities of Shri Krishna and Balram. They have Mother Yashosa and Nand Baba at their left and right. The deity of Mother Yashoda has the deity of Radhaji next to her along with Rohini (Balram’s mother) and Revati (Balram’s wife). Next to Nana Baba, stand two of Shri Krishna’s friends Sudama and Madhumangala. 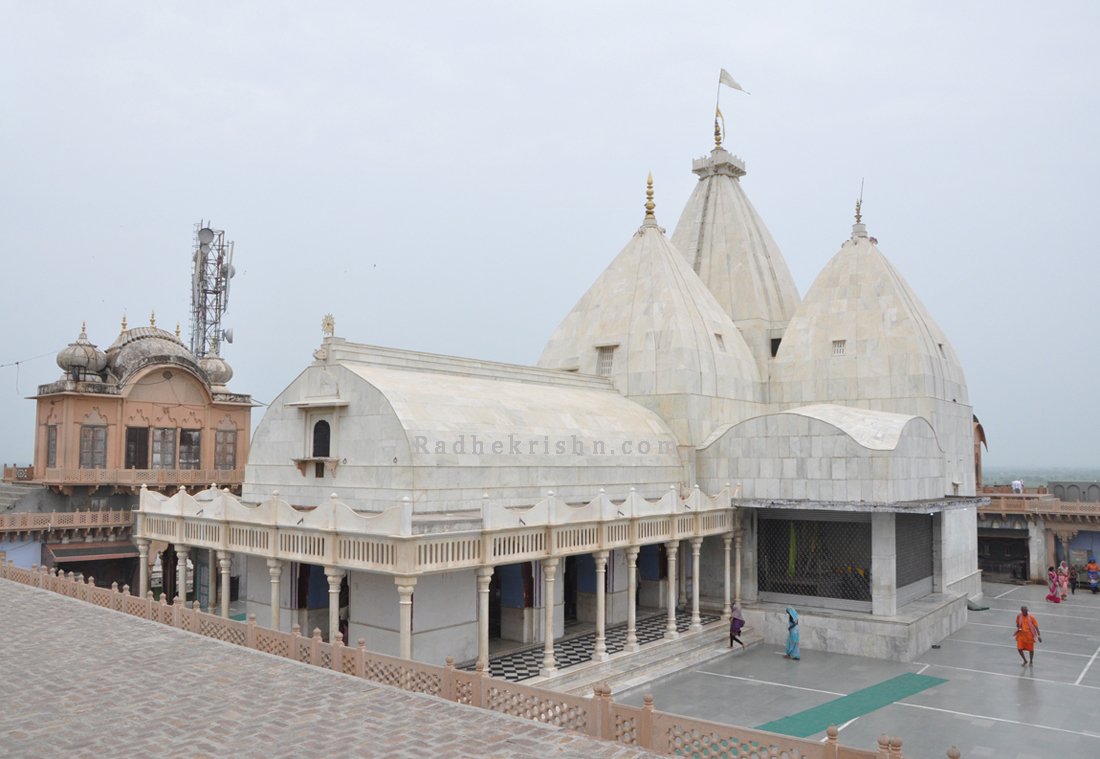 Temple is constructed adjacent to the Nand Bhawan on the Nandishwar Hill. Nandish as we know is another name for Lord Shiva. Since Nandishwara Hill is believed to be a form of Shiva, Nandisvara temple is dedicated to Lord Shiva.

Pavana sarovar is a lake at the bottom of the Nandisvara Hill. It is supposed to be the favorite lake of Shri Krishna. When Krishna and Gwals ( Friends) would return from cow grazing, they would bring the cows here to drink.

Charan pahari is located at the south west of Nandgram ( Mathura, UP ). It is said to have the impression of the feet of Shri Krishna / Kanha. Charan Pahari temple is a famous temple and located at hill in Nandgaon.

Nandgaon is located 51 km North-East of Mathura in Uttar Pradesh District. It was established by Nand Maharaj, father of Shri Krishna. Nandgaon can be reached from all the holy places in Mathura like Vrindavan, Barsana and Gokul etc. You can either catch a train from your town to Mathura or a plane to Agra or New Delhi and from there you can take a bus or a cab to reach Nandgaon ( Mathura).