Sharad Purnima has special significance in Hinduism. It is believed that by fasting on Sharad Purnima all wishes are fulfilled. Sharad Purnima is also known as Kojagari Purnima. It is said that on this day the moon rains amrit on the earth. On the day of Sharad Purnima, worship of the Moon, Mata Lakshmi and saffron Vishnu is done. 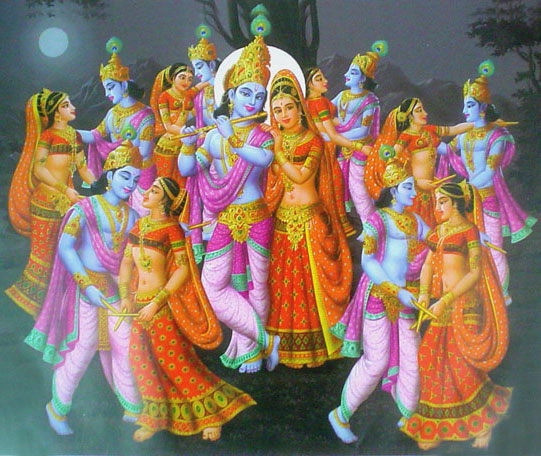 Maharas was composed by Shri Krishna on Sharad Purnima

Apart from Sharad Purnima, the full moon of Ashwin month is also called Raas Purnima. Raas Purnima because Lord Krishna along with Gopis performed Maharas on this day. On the moonlit night of Sharad Purnima on Sur Shyam Sarovar in the village of Parsoli near Govardhan Parvat, while Krishna was dancing with the gopis, the moon also stopped looking at this sight. Know about the Maharas episode of Shri Krishna.

Morning did not take place for six months

Sur Shyam Chandra Sarovar is seen on the way towards the village of Soukha, about two kilometers from Govardhan Dham. It is believed that on the night of Sharad Purnima, Lord Krishna came here with his Sakhas and started playing Murali. Listening to the tune of Murali, all the gopis left their work and ran away. Every gopi wanted him to dance with Lord Krishna. When every Gopi came and spoke to Lord Krishna one by one, Lord Krishna danced with everyone to fulfill this wish. At the same time, Shri Krishna was seen dancing with every gopi in crores of forms. The scene was so pleasing that the moon had stabilized its motion to see this Maharas. The moon was so lost in Maharas that it was not dawn for 6 months. This Maharas continued continuously for 6 months.

Bholenath himself also pulled himself up to see the greatness of Lord Krishna. But as soon as they reached there, the gopis stopped them at the door, saying that only gopis could come here. Mahadev then took the form of Gopi and joined the Maharas to see this wonderful moment. This form of him was called Gopeshwar.

At the time of Maharas, the moon of Sharad Purnima was fixed for six months. At that time, the condensed nectar juice that fell on the earth from the coolness of the moon, the same juice collected and became a lake. Since then, this lake has been named Chandra Sarovar.

Importance of Kheer to Sharad Purnima

It is also believed that on this night, nectar springs from the rays of the moon. Then there is a law to make Kheer in North India on this day and keep it in the moonlight overnight. Those who taste Kheer illuminated by the bright rays of the moon on the occasion of Sharad Purnima, it is believed that they get the blessing of mental peace along with good health.

The Moon is a symbol of our mind. Our mind is also filled with positive and negative thoughts like the Moon. As the moon moves continuously through the darkness of Amavasya, it completes the journey of the full light of the full moon. Similarly, the human mind also finds the light of positivity progressively progressing from the darkness of negative thoughts. This is the goal of human life and this is the message of Sharad Purnima.